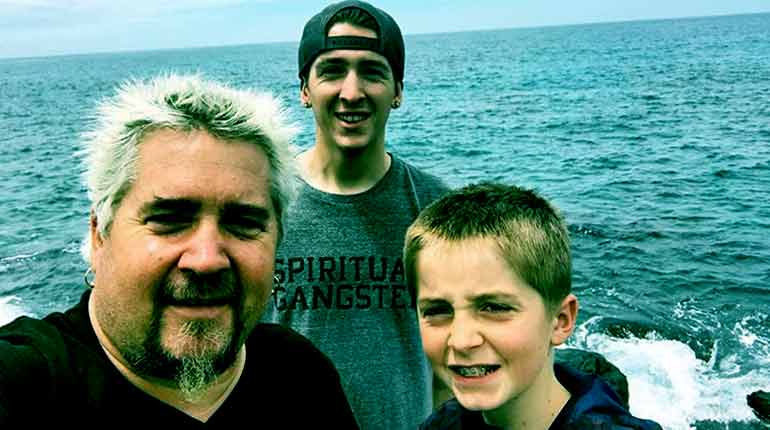 The name Guy Fieri is one that is renowned all the world over. He is a restaurant owner, game show host, author and an Emmy Award-winning television powerhouse. The man is a great cook and as such, has made his name on the Food network has come in the form of his cook show. But Guy is not the focus of our review today. Instead, we are going to look at the lives of his children.

Who are they? Are they as talented or successful as their father? Being the child of a famous television personality can make for an exciting life. As such, this is one article you are not going to want to miss. Learn more about Guy Fieri’s children. Who are his two sons? Find out what they do or are doing.

Hunter is Guy and Lori Fieri’s eldest son. He was born on the 7th of August 1996, which makes him 22 years old at the moment. For his educational background, Hunter would attend Sonoma Academy, before venturing on to William F. Harrah College of Hotel Administration. Hunter would then go on to study at the University of Nevada, in Las Vegas.

While in high school, Hunter was renowned for his chocolate Tacos. They were so popular in fact that they would inspire him and his friend to operate their own food truck business, Culinary Gangsters, on the outskirts of their high school; a company they would run successfully for well over two years.

Since he is relatively young, he doesn’t have much going for him at the moment in the form of a career. Regardless, he has already made his professional debut on television. The star was a part of his father’s reality show, Guy’s Big Bites. It would run from 2008 to 2016.

Hunter also had a starring role on the show, Guy & Hunter’s European Vacation where he appears alongside his father, Guy. The reality star takes his son, Hunter on an exploratory trip to Europe as a high school graduation gift. On the show, we follow the pair as they visit 13 cities across the continent to give Hunter a global culinary experience to help him get a little more experience before he started his hotel management course in college. The father and son duo roamed through England, France, Germany, learning all they could about making favourite local dishes.

The trip also went on to take a much more personal meaning when the pair to were reunited with relatives in Italy. They also retraced Guy’s footsteps when he was younger; visiting all the places, he did when he was an exchange student.

A few other shows he has been part of include: Guy’s Grocery Games, Guy’s Family Cruise and Guy Fieri’s Family Union. While the reality star views his father as a role model, their personalities couldn’t be any more different. Guy Fieri is explosive, whereas his son is a little more gentle and reserved. He takes after his mother, Lori, in this regard. However, Hunter appears to be much closer to his father.

Ryder is the youngest son of Guy and Lori Fieri. The boy was born on the 31st of December 2005 in Northern Carolina, which makes him 13 years old at the moment. Ryder is still very young, so there wasn’t much information to unearth on any potential career. Like his brother, however, he has made a few guest appearances on his father’s reality shows. He has featured on shows like Guy’s Grocery Games, Guy’s Family Cruise and Guy Fieri’s Family Union.

We were also not able to determine whether, like his father and brother, the young man is interested in the culinary arts. All indicators at the moment point towards the fact that cooking is something that runs in the family, so it could only by a matter of time before Ryder picks up the mantle. For now, all the young man has to contend with is school. He will want to do the best that he can to live up to his impressive family name. Maybe cooking isn’t for him in the first place.

There is a host of interests out there in the world. He doesn’t have to pursue cooking if it’s not his passion. Ryder still has a lot of growing up today, so it is not a decision he needs to make any time soon. His mother is a stay at home who spends most of the time taking care of her kids. So while Hunter and Guy are out there on the road, Ryder is busy spending some quality time at home with his mother. It would explain why the two are close, as they tend to spend more time to together.