Is Ed Gamble Married To His Wife Or In A Gay Relationship? What’s His Net Worth 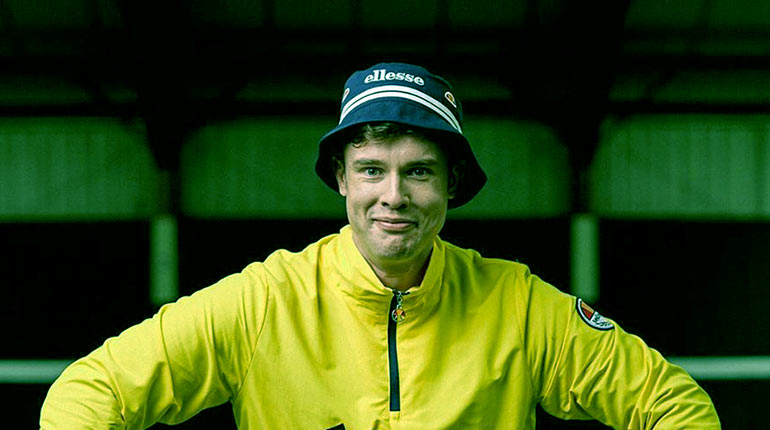 ED Gamble gained media attention after appearing as a contestant on Taskmaster season nine this September. The Tall man’s show is no joke as it has 1.7 million viewers every week, so being the part of the show is itself a huge deal, but when you are young, willing, and a funny dude like ED Gamble Sky is your limit.

In today’s topic, we have Ed Gamble, a British stand-up comedian, known for co-presenting The Peacock and Gamble Podcast and his regular appearances on Mock the Week.

Girls gush over ED’s looks, but he is frequently mixed in gay rumors, so is it true that the funny man is gay? What’s his relationship status? Well, the article compiles every small detail on your favorite podcaster/stand up comic, so let’s find out.

Who would have guessed Taskmaster’s “Ed” would have a name such as Edward Stephenson Gamble! Ed was born on 11th March 1986 in Hammersmith, London. Southwest London resident Gamble completed his high-schools from King’s College School, a boys school in Wimbledon.

The Durham University graduate in Psychology, Ed used to perform his skids at the Durham Revue and also was a 2007 Chortle Student Comedy Awards’ finalist.

Prior fame, Ed Gamble and Ray Peacock, together did a series of podcasts summing over 100 episodes for two different shows. He also did a 15 minutes monologue on Russell Howard’s Good News in 2010.

Additionally, he and Peacock have recorded numerous FUBAR Radio shows. In 2014 Gamble made his solo debut at Edinburgh Fringe “Gambletron 5000”. Following that, he reappeared with Lawman, Stampede in 2015 & 16, respectively. A wise man makes other people laugh, not by offending but taking shots at himself! Ed exactly follows this quote; he, in his comedy skid “Blizzard,” solely was based on his diabetic conditions.

READ MORE:
Is Katy Wix Dating Someone Or Is She Married? What's Her Net Worth?

Gamble showed on BBC America in 2015, with Amy Hoggart, in Almost Royal. They portrayed siblings Georgie & Poppy Carlton. The show aired in the UK on E4, and with its success, it’s season two was also aired in 2016. Since July 2015, Gamble was a regular panelist on Mock the Week, a BBC panel show. He hosted the 2017 and 2018 Elis James and John Robins Show on Radio X. He is also known by reference to his diabetes as the “diabeast”

In the Greg Davies Netflix exclusive You Magnificent Beast, his “downstairs” maintenance was briefly mentioned.

New episode of @OffMenuOfficial is out right NOW. Special guest this week is Daisy Cooper from This Country. Dessert choice is on point.

Gamble now hosts a podcast “off-menu” with fellow comedian James Acaster since 2018. In 2019, Gamble took part in Taskmaster in its 9th season.

Is Ed Gamble Dating Someone? Or Is He Gay?

Ed Gamble never addressed his sexual orientation, and always showed up posing with guys. So we believe a huge part of his gay rumors also comes from his long and successful partnership with Peacock and his current chemistry with James Acaster.

Some of his previous photos with his buddy and partner Peacock have raised a lot of eyebrows, but they are comics, so you can’t affirm things judging by a photoshoot. Additionally, his social media has both men and women on it, but he hasn’t hinted if he is dating someone of the same-sex!

But, his personal life is no more a mystery, friends! He has opened up about his relationship on his official Instagram.

On 31st December 2018, he revealed his girlfriend turned fiance. 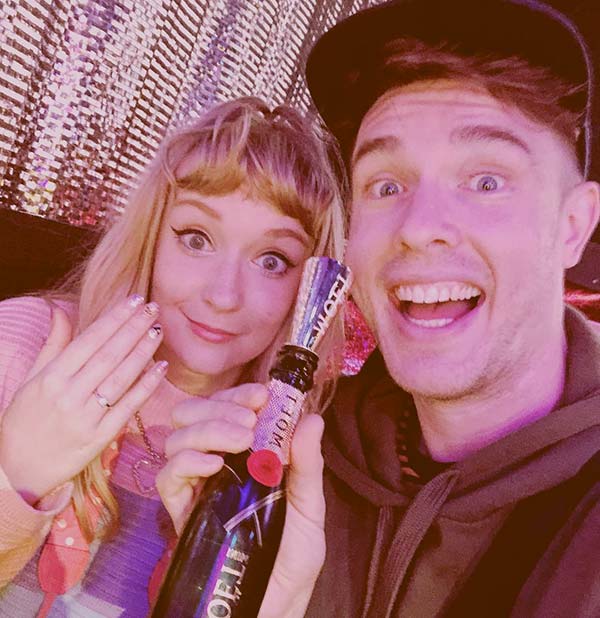 Ed Gamble with his girlfriend showing the engagement ring

He shared that he wasn’t gay or even single by posting a picture on his Instagram where his girlfriend was showing the engagement ring, and the caption said it all. He, in the caption, wrote, “Like most years, 2018 was a year-long, definite highlight was October when we got engaged and then got pissed at a robot show”, meaning the duo was already engaged in 2018’s October. Hence, Ed so far isn’t married but is engaged.

Though he has shared the picture of his wife to be, her name and other personal details are still under rocks, as the comedian likes to keep us guessing.

Ed Gamble isn’t an unusual name for podcast lovers, in a very small time frame, he has appeared in a TV comedy show, has filled in many stages as an introductory act for some known funnymen. He also has spent three beautiful years as a radio host/ comedian for one of the loved shows Peacock on FUBAR Radio from 2011 till the end of 2013.

As a standup comedian, a tv star and podcaster Ed make around $50-$60 grand salary, which is a considerable number and after appearing in the shows such as Taskmaster and BBC’s Mock the Week his shares will see a rise. As of now, he reportedly makes an additional $10 thousand from his podcasts, and occasional stage shows further help him bring in $45 to $55 thousand. His yearly earnings figures over $150 thousand. However, his net worth is still not known, as he hasn’t even hinted a bit about it.