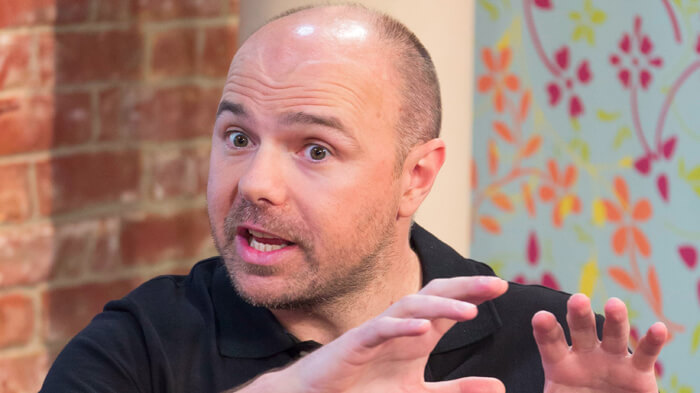 If a couple lives together share same house and bed for many years, as long as 20 years what would you call the relationship? Karl Pilkington shares a similar relationship with Suzanne Whiston who are in a relationship since the 1990s. Though Suzanne is Karl’s girlfriend many know her as his wife.

Karl Pilkington is an English television presenter, author, comedian, radio producer, actor, and voice actor. He rose to fame as a producer of Ricky Gervais and Stephen Merchant’s radio show for XFM London. This British comedian is successful to make many laugh through his wicked sense of humor and well-timed moaning expression.

His partner Suzanne Whiston is a telly producer and active in this profession since 1998. Recently, Suzanne has caught a lot of attention for her very private life. In this wiki like bio we will bring all the information on Suzanne like her age, relationship with boyfriend, career, and facts.

How She met Karl?

The way Karl and Suzanne met is rather interesting. The pair met at work and shared a work-buddy relationship. At the time they both worked for Key 103 a radio station in Manchester. Initially, they were unknown until Suzane gave Pilkington 20p to pay for a hot chocolate. Karl later did some editing work for Suzanne, resulting in Whiston buying another hot chocolate for Pilkington. Reportedly, the pair has been together since the 1990s.

Suzanne is a very private person as she doesn’t speak much about herself or personal life. The only time we hear about Suzanne is when Karl mentions and talks about her in podcast and interviews. However, it is clear they share an impressive relationship. They have been in love affair for more than 24 years.

At some point, every couple in love affair thinks about marriage but for this couple, they seem to be happy with their boyfriend/girlfriend relationship.

While looking at the circumstance it is unlikely the duo getting married anytime in future. During an interview, while asked if Karl was married, he told no and opened getting married with longtime girlfriend, Suzanne, doesn’t make any difference in the relationship. Also, he thinks marriage is pointless. Q: You’re not married, are you? Karl answered:

“Nah. Long-term girlfriend and all that but I just think it’s pointless. I don’t know what difference it would make. You can either have a big wedding and then think: ‘We could have chucked that money at the mortgage,’ or you do it on the cheap at a register office – what’s the point of that?”

It is clear the couple don’t need official wedding vow to become husband and wife.

Her Career and progression, net worth

Suzanne is widely known in the UK for her production work. She is a keen sports lover and loves to revolve her work around the category.

Initially, she worked at the Key 103 a radio station in Manchester. Later in 1998, she worked as a producer in sports for BBC. She and her production team gained new height with the work on BBC’s Match of The Day football highlights. Also, she worked with production team responsible for TV coverage at World Cup in Germany (2006). She served as director of Ed production from 2012 to 2014.

Since March of 2014, she employs as a director alongside her partner Karl Parkington in Alrite Productions Ltd. Also, she has worked as freelancer journalism and broadcast media trainer. She is RHS Level 2 Horticulturist. She has successfully established herself in the profession dominated by male.

2006: Involved in TV coverage of Worldcup in Germany