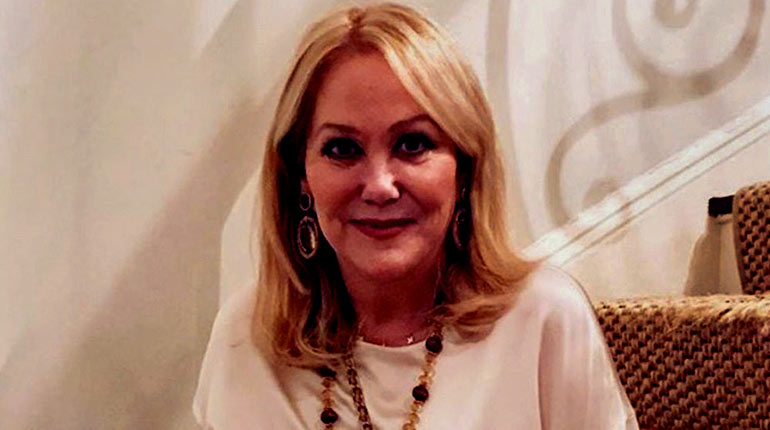 For most of us, a terminal illness is the end of the line. It may not be the end of our lives, but it certainly means the end of our career and possibly our social life. It’s a literal insult to injury, but we have seen even married couples being torn apart because of it. But the person we are about to talk about is not like “most of us.”

Meet Nina Griscom, former model and current designer who has been given the title of the 80s “It” Girl by the New York Times. Nina Griscom has had an extraordinary life since her childhood, and she has continued it throughout her life. Her life has been nothing short of an adventure, even her married life and life after suffering from a terminal illness.

Born to be a Socialite

Nina Griscom was in short born in 1954 to be a socialite, not typical like the spoilt and uptight kind but as graceful as the textbook definition of a socialite. How could she not have been with parents like Charles C. Renshaw Jr., her father, and mother, Elizabeth Fly Vagliano Rohatyn?

Her father used to be a vice-president as well as an editorial director at the American Medical Association in Chicago. He used to oversee all nonclinical publications of the medical institution. Sadly, both of Nina Griscom’s parents died in December 15 (father) and October 9 (mother) according to her IG posts she put up in their remembrance.

Her mother said to be a “Southern beauty” by NY times was married thrice in her life. She was married for longer and more famously to her step-father, financial tycoon, Felix Rohatyn.

Felix Rohatyn is a legend in the financial history of America. Many revere to him as the hero chairman who stopped the financial crisis of New York City in the 70s. Others may spite him, for he obtained such an accomplishment by cutting thousands of city workers from their jobs. 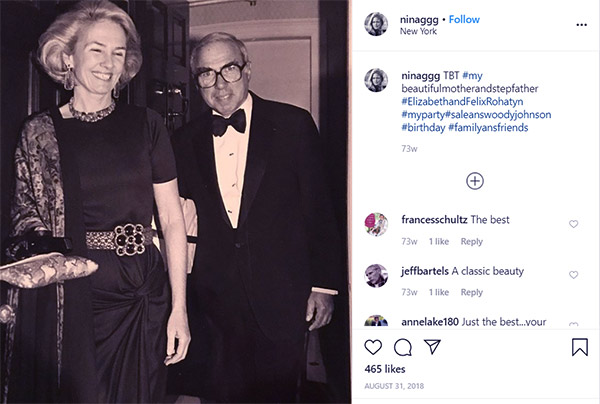 Nina Griscom, as explained, was not just the “it” girl, but with her blonde hair, blue eyes, and pretty face, it was only a matter of time. She was not at the forefront of the 80s models, but she did share the stages with the likes of Blaine Trump, Anne Bass, and Carolyne Roehm.

Back then, there used to be also limited platforms and influencers that made her feasible enough to appear on some notable magazine covers like that of Elle, Italian Vogue, and other projects like commercials. She would also star in the 1999 romantic drama film ‘At First Sight.’ 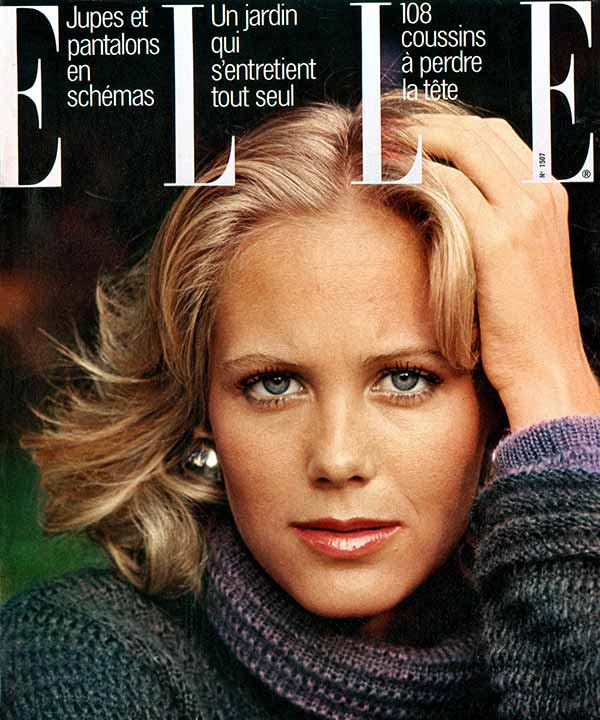 Caption: Nina Griscom in the cover page of Elle

After her modeling days were coming to an end, the career of a TV host came knocking at her door. She started out as a co-host of HBO Entertainment News with Matt Lauer. However, she had a change in genres after successfully hosting six years of food show ‘Dining Around’ with Alan Richman. She also made an appearance in ‘Iron Chef America’ in 2005.

Griscom is currently in a completely new business of designing handbags. She sells them in her website as well as partnering up with ‘GiGi NewYork.’ Martha Stewart even gave her a shoutout in 2014, loving the design of one of her purses.

Nina Griscom has started her own line of beautiful handbags. She showed me two at le cirque restaurant last night pic.twitter.com/0HDrLZn7nP

Can you also be called an 80s model if you did not get married multiple times? Nina Griscom was married first to a Ford Model Booker, which, according to her, “lasted only 10 seconds.” It was so short-lived that we don’t even know the name of her first husband.

Her second husband was a businessman by the name of Lloyd Griscom. They would also not last, but Nina (née Renshaw) would carry his surname for the rest of her life. She had a promising married life with her third husband, a plastic surgeon who went by as Dr. Daniel Baker. Their relationship did last 11 years after getting married on 8th December 1980, but an affair she had would cause the end of it. 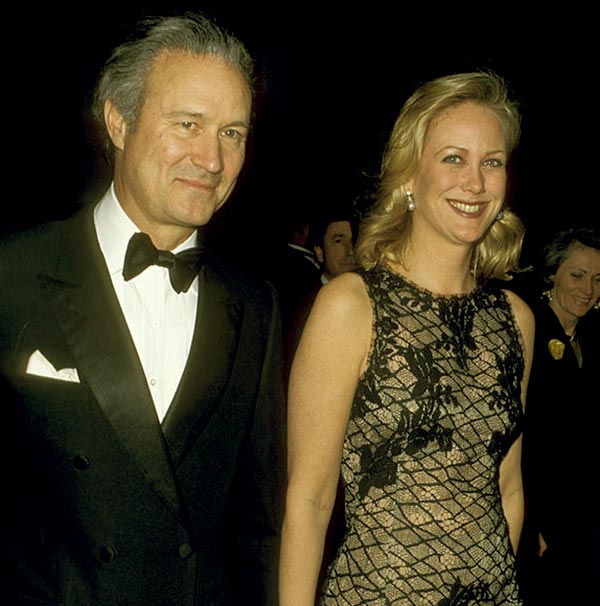 Speaking of her affair, Nina Griscom had quite an infamous one. It was with a married Floridan man by the name of Pepe Fanjul. Fanjul, who was of Cuban-American descent, was known to have quite a large sugar business. Pepe Fujal almost became her fourth husband but had a change-of-heart at the last moment about abandoning his existing wife and married life.

Nina Griscom has a daughter with Daniel Baker by the name of Lily Baker. She is in a relationship, but we don’t know if she is married or merely dating a man by the name of James.

Nina Griscom is currently married to Leonel Piraino, an expert in NY real estate who is her fourth husband. The details of their relationship and married life are not present, but we have photos dating back to 2003 of the two of them. They lived in a duplex townhouse in the Upper West Side of New York City until recently.

Illness not affecting her Career or Married Life

Nina Griscom’s life has been nothing short of an adventure. From changing career to partners in her married life and constant traveling to faraway place. However, nothing could have prepared her for the grim news in late 2017 when she would be diagnosed with amyotrophic lateral sclerosis or ASL.

It would start with the loss of the spring effect in her right leg, difficulty to climb stairs, and a face-pant fall, which would lead to being a diagnosis of her illness. She was still quite functional until September of 2018, but since that point, her body started to give up on her. First, she required a cane to walk but then had to use two plastic clutches.

Eventually, she would find it more comfortable to use a wheelchair or an electric scooter to get around. However, Nina Griscom’s life now looks hardly as dark and grim as we are making it sound. You should follow Nina Griscom’s Instagram account to see that even after 2017, her life has been joyous and fun. 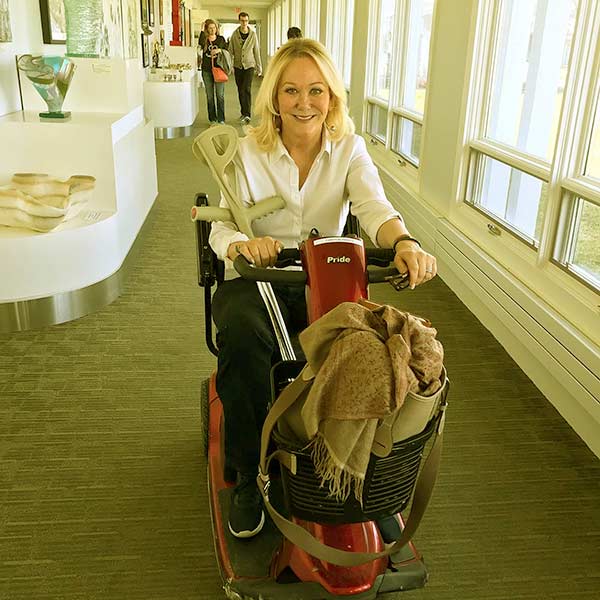 Her friends and family are vital in making it that way. She and her husband moved from their Upper West Side Duplex to a more practical and accessible apartment in Park Avenue. Since 2017, she has traveled to Paris, petted wild animals in Africa, took in the ancient monuments of Egypt, and finds adventure in her day to day life. 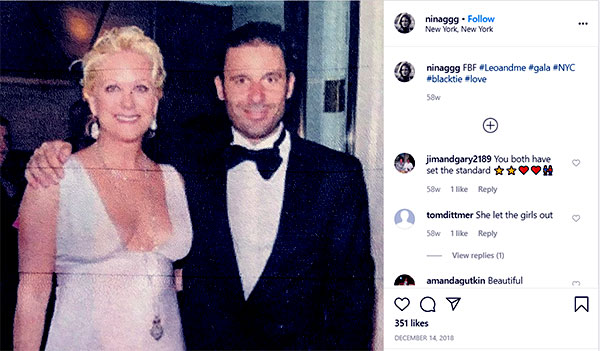 Caption: Nina Griscom’s husband and family played an essential role in helping with her illness