Who is Cobie Smulders Married to? Meet her Husband and Kids 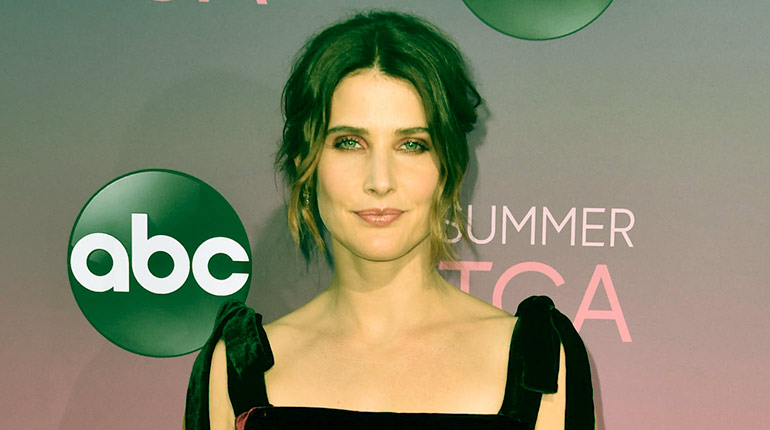 Cobie Smulders has a face that many recognize, but her name might not be common knowledge. Her first shot of fame came from the role of television reporter Robin Scherbatsky in the CBS sitcom How I Met Your Mother. Yup, Cobie is the actress who played Robin in the popular series How I Met Your Mother. Besides the series, she is also famous for her role as Maria Hill, right-hand of Nick Fury in the Marvel Cinematic Universe.

Let’s get into knowing more about the crush of many from the late 2000s, Cobie Smulders.

Who is Cobie Smulders?

Cobie Smulders is a Canadian born American actress and model. She was born on April 3rd of 1987 in Vancouver, BC, Canada. Her father was of dutch nationality, and her mother was a Brit. Also, Cobie grew up along with four siblings, Melissa, Amy, Fiona, and Julie. She attended Lord Byng Secondary School in Vancouver, where she was active in the acting field throughout her high school.

But after high school, Cobie got into modeling, which had more opportunities for her at the time. Since her childhood, Smulders wanted to become a marine biologist; she even registered at the University of Victoria for the same cause. But Cobie had also joined an acting class the same summer and wanted to commit some time to acting.

While her remarks towards modeling are she “Kind of hated” it, and because of that, she was hesitant about pursuing a career in acting. But after her time in the acting school, she really got into acting. She debuted on-screen in the year 2002. Cobie always wanted to attend school and contemplated going back, but her acting career soon got traction.

Smulders got her first acting role as a guest role in Showtime science fiction series Jeremiah. For her first permanent role, Cobie got a role in ABC series Veritas: The Quest, which ended after a single season. But then, Cobie got the part of Robin Sherbatsky in the TV series How I Met Your Mother, and this set her career in an upward trajectory real fast. 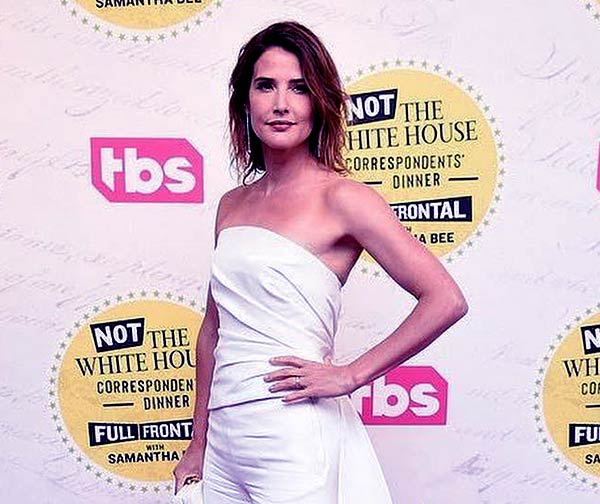 Cobie was with the CBS sitcom series for all of its nine seasons from 2005 to 2014. And in 2012, Smulders was cast as Maria Hills in the MCU movie The Avengers. This propelled her already upward career path and established her as one of the heartthrobs of Hollywood. But, sadly, Cobie’s heart already throbs for someone else; she is taken.

Hmm… A lot of peoples wonder about this, but yes, Cobie is married. Not just married – Cobie is Happily Married and loves her husband as much as she the time she fell in love with him. Smulders nonchalantly brags about her husband on TV shows whenever given a chance. Which is precisely what she does in the episode of Live Kelly And Ryan saying,

Cobie Smulders got married in the year 2012 on September 8 to the American comedian, actor, and writer Taran Killam. Taran and Cobie had been dating since the age of 22, i.e., since 2004, and got engaged in January of 2009. The couple had a fabulous ceremony at  Solvang, California.

Cobie Smulders’s husband is Taran Killam, who is an American actor, writer, and comedian. Born on April 1, 1982, in Calver City, California, Killam grew up in the same city as well. He attended the Los Angeles County High School for Arts for high school. As for higher education, he graduated from UCLA’s School of Theatre, Film & Television as a Musical theatre student. 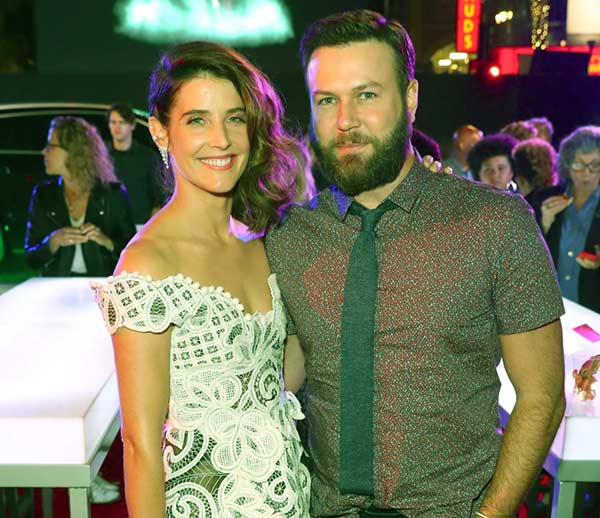 Currently, Taran can be seen on the show Single Parent, an ABC original show opposite to Leighton Meester. Throughout his career as an actor, writer and comedian Taran have garnered a net worth of $4 million, which is quite a fortune. Hence he can live luxuriously with his wife and also his childrens. We wish him well in his coming days and future endeavors.

Taran and Cobie met for the first time during a party after the shooting of a show’s pilot episode starring Taran. Cobie’s friend, Paul Campbell, was also a cast in the same show and she was in the party with her friend. Smulders wanted to compliment Taran for his performance and looks, which she did, but Killam has no recollection of it. i.e., Taran doesn’t remember his first meeting with Cobbie.

With the first meeting getting nowhere, this love story started in the second meeting. Cobie and Taran met for the second time in the birthday of their mutual friend. The year was 2004-5, and both of them had turned 22, as Taran’s birthday is just two days before Cobbie. Cobbie and Taran hit it off with the comment that their friend is too old as she was turning 30.

Shortly after this party, Cobbie and Taran confirmed going out with each other. And their love ever since has only been increasing.

Cobbie and Taran have been married for seven years now, and so far, they have two children. Both daughters. While they got married in September of 2012, Cobbie and Taran already had a child in the year 2009. Let us know more about Cobbie Smulders’s kids.

Shaelyn Cado Killam, who is currently ten years of age, was born on May 16, 2009, is Cobbie’s first daughter. After Taran popped the question to Cobbie and they got engaged, which means Shaelyn might have been the factor that motivated Taran to pop the question. In any case, this happy couple got blessed with their first child sometime after their engagement. 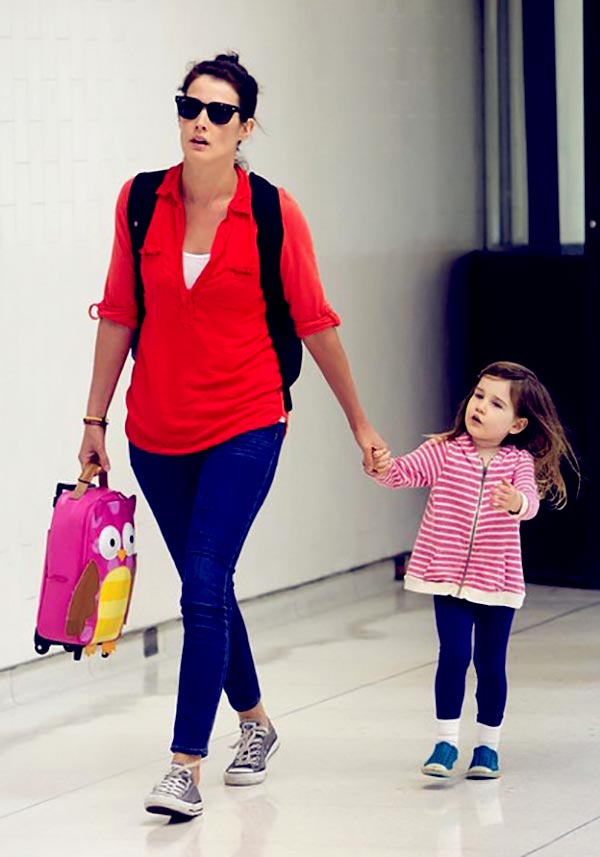 Cobbie was pregnant with Shaelyn while shooting for the third/fourth season of How I Met Your Mother.

On January 4, 2015, Cobbie and Taran were blessed with their second daughter, who they have named Joelle Killam. The family of four is currently living in New York City, New York. But, since both Cobbie and Taran have a tight schedule, they take turns caring for the childrens. Also, their families help in taking care of their daughters, and this allows the stars to focus on their job without worrying about their daughters.

Above all, Cobbie and Taran both have made it clear that their priority is their daughter and will drop any work without a second of hesitation for them.

With her rise to fame from the series How I Met your Mother, Cobbie Smulders’s career has never taken a descent. Cobbie’s ever-growing popularity is contributing to her net worth as well. For the peoples wondering about Cobbie’s financial status, behold.

Cobbie Smulders has a staggering net worth of $25 million, which includes the property she recently bought in 2018 at $3.1 million and the house she purchased in 2012 at $2 million in Manhattan, New York. Even if Smulders were to retire right now and not work for the rest of her life, this net worth could support her humble lifestyle generously.

But, being the passionate woman she is, Cobbie still works actively in projects which she finds attractive. Recently, Cobbie Smulders has been cast as the lead role in the ABC crime drama Stumptown.

Cobbie is currently 37 years of age. She is a beautiful Canadian born American actress with many famous roles. Cobbie is very conscious about the environment, and following the  Amazon rainforest fire, she has stopped eating red meat. This is supposed to help the environment and wildlife, which she announced in her Instagram post.

Similarly, Cobbie has also worked with Oceana, an international ocean conservation organization, by filming a public service announcement in 2014.

In 2015, Smulders revealed about her cancer, which she was battling while filming the show How I Met Your Mother in 2007. Cobbie had surgery to remove cancer from her ovaries, but it had also spread to her lymph nodes. So she had to go through multiple surgeries in the span of two years to remove cancer.

In 2019, Cobbie announced that she is now in remission, which is good news to her fans all over the world. Perhaps the couple has plans for another kid following her complete recovery.

Cobbie Smulders’s real name is Jacoba Maria Smulders, named after her great aunt; also, she is a fluent French Listener.