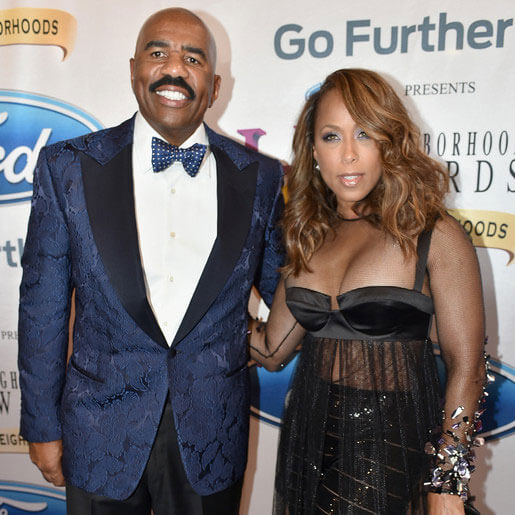 It’s normal if someone falls in love with a girl at first sight or even imagine marrying her. But, how often do you see someone claiming the marriage right to a girl whom he just saw and happens to fall in love? We have a similar story with  Steve Harvey and his current wife Marjorie Bridges-Woods. So, let’s have a look at their love affair turning into marriage, with their past. Are the pair planning for a divorce?

Before I begin the story, a quick insight on Steve Harvey. Well, you must remember Steve Harvey as TV host from hit shows like Family Feud and Celebrity Family Feud. But, he is more popular for a quite different reason. A cause of major social media meltdown, Steve is the person who will be remembered quite long for the funny and embarrassing incident at Miss Universe Event’2015′ where he announced runner-up with the winner. Later he apologized for the mistakes, however, this nightmare moment will be tagged along for his whole life.

The first meeting between Steve and Marjorie is quite interesting which you will be astonished to know how Steve Harvey approached her. Steve Harvey saw Marjorie for the first time at ‘Memphis Comedy club.’ We know when Steve talks he made it look ridiculously easy. That day, Steve Harvey stood on the stage and announced that he is gonna marry Majorie in future. He spoke as;

“I don’t know who you are but I’m going to marry you.”

Well, that made an instant impact on Marjorie. Soon the two started dating and became close to each other. However, as the relation was flourishing Steve left her for some undisclosed reason. During an interview, Marjorie opened about their growing affair came to end because Steve left without a notice to her.

“I knew he was The One shortly after I started dated him…but then he just left. Disappeared.”

So, they never get the chance to tie their relationship. The lovebirds got another shot after Steve divorced his second wife Mary Lee in 2005.  This time the relationship resulted in marriage as duo tied the knot on 25th June of  2007.

Steve and Marjorie Harvey form a sweet family of two. There are no children from the pair but they have children from their past relationship. Steve has one child: Wynton(1997) from second wife Marie Lee and three more children from first wife Marcia Harvey; Twins-Karli and Brandi(1982), and  Broderick Jr(1997).Marjorie has three children from her previous marriages; Morgan, Jason, and Lorie.

Caption: Marjorie Harvey with her daughter  Lorie and Amanda Harvey.

There are not any verified or proofed data regarding her past husband and affairs. If the reports to be believed both of the Marjorie past husbands were criminals. They were both apparently large Memphis drug dealers. She divorced her first husband after he was arrested and sentenced to life in prison. Her another marriage also didn’t go as well as she married to infamous  Darnell Woods.The same Darnell Woods from the Woods brother who is a famous drug dealer.

The couple has never admitted or shown dissatisfaction towards their relationship but tabloids and online portals have generated rumors about their divorce in past. An  Online portal, Mediatakeout, suggested the two were in the stage of divorce after Marjorie asked paparazzi to refer her as Marjorie Bridges-Woods instead of Marjorie Harvey.

“While attending Paris Fashion Week, she told paparazzi to refer to her as Marjorie “Bridges-Woods. Marjorie’s BIRTH last name is Bridges, and the name “Woods” came from her ex-husband . . . who went to prison as a member of a Memphis HEROIN RING.”

Besides this silly rumor, the couple is together and leads a blissful married life.

She was born on October 10, 1964, in the US with the birth name Marjorie Bridges. She is African-American with a height of 6′ 1′. Marjorie is mostly famous for her relationship with Steve Harvey who is an actor, comedian, writer and a producer. There is not much known about her early life. As for her education, she is drop out of Memphis University. She has developed a career in fashion industry and tours around the world for various fashion shows.